Metallurgical Testing Labs is currently able to carry out the following hardness testing methods. It is noted that MTL is SANAS Accredited for these methods:

Hardness testing forms an important part of the testing of PQR’s according to BS EN ISO 15614. The extent of testing is known as a hardness traverse. The extent of testing (amount of indentations) will depend on the thickness of the parent material, process weld preparation and any other supporting specification or welding code. 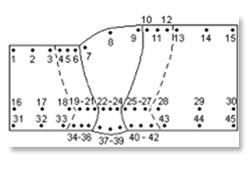 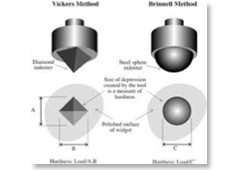 The illustrations on the left show examples of the types of hardness “indenters” used including the type of indentations that they leave behind. The hardness results are taken from measuring the average size of these indentations which when compared to the load used will give a hardness result. Naturally the harder the material is, the smaller the indentation will be given a constant load.

As can be seen from the picture on the right, Vickers and micro Vickers hardness tests are very useful for determining the hardness of specific phases within the microstructure of the parent material. In this instance, one is able to see under magnification that the rough (darker grey) phase is much harder than the phases just beneath it as the ones below are larger in cross section. It stands to reason that according to the definition of hardness, the smaller the indentation, the higher the hardness. 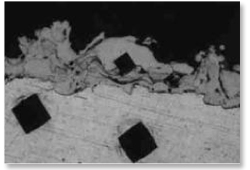 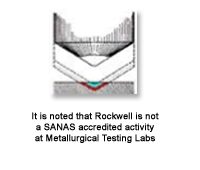 Rockwell testing is a little different as it measures the distance of penetration into the material, via a zeroed point. The greater the distance between the zero point and the tip of the indentation, the softer the material will be.